HISTORY OF THE LEAGUE OF WOMEN VOTERS OF TEXAS

The League of Women Voters of Texas (LWVTX), a nonpartisan political organization, was formed on October 19, 1919, at San Antonio, when the Texas Equal Suffrage Association was dissolved to reorganize for a new purpose. Earlier the same year Carrie Chapman Catt, head of the National American Woman Suffrage Association, had urged the formation of the League of Women Voters as the successor to NAWSA and as the official support organization for newly enfranchised American women. Under the forceful leadership of its first president, Jessie Daniel Ames of Georgetown, who served from 1919 to 1923, the LWVTX focused its efforts on educating the newly enfranchised women voters of the state. To this end it published a monthly newspaper, the New Citizen.

In early years the group urged women to pay poll taxes, conducted citizenship schools, held "Get Out the Vote" campaigns, issued a "Voter's Calendar," queried political candidates and published the results, and printed a booklet entitled Know Your County. The League was active in the Joint Legislative Council, a consortium that lobbied for women's welfare, and in the 1920s it lobbied for legislation to establish a minimum wage for women, provide maternity and infant care, prohibit child labor, allow jury service for women, reform the state prison system, improve rural education, and give women equal representation in delegations to national party conventions. Notable officers during the early years included Helen E. Moore of Texas City, Alice Merchant of El Paso, Jane Y. McCallum of Austin, Mrs. D. W. Kempner of Galveston, and Mrs. Harris Masterson of Houston.

As a nonpartisan organization, the LWVTX did not endorse or oppose candidates or political parties; it studied political issues and issued position papers. After tenaciously working for more than eight years, in 1949 the organization secured legislation ensuring a secret ballot for Texans. The group also labored for a constitutional amendment, which finally passed in 1954, enabling Texas women to serve on juries.

In the late 1940s and early 1950s the LWVTX supported the establishment of a system of family courts in Texas, urged elimination of legal discrimination against women based on marital status, and compiled a comprehensive "Know Your State" survey that became the highly acclaimed textbook Texas Constitutional Review. In later years the league gave sustained attention to the need for a revised state constitution, studied the selection and tenure process for appellate judges, and worked toward the abolition of the poll tax and the establishment of a permanent voter-registration system. It also analyzed relationships among federal, state, and local governments, especially cases in which the state relied on the federal government to solve urban problems.

From its origin the LWVTX has remained a member-directed organization. The state board, which establishes policy, is elected at biennial conventions, where the organization's budget and programs are also approved. Membership became racially integrated and reached a peak of 5,000 in the mid-1950s; it stabilized at about 4,100 in thirty-seven local leagues by the late 1980s. The LWVTX, like other state arms of the League, is affiliated to the national organization through some shared finances and common goals and structure but establishes its own program. The league publishes the Voters Guide to inform voters of the qualifications of candidates in statewide elections and sponsors televised debates between gubernatorial candidates. In 1986 it published the Texas Government Handbook for use in secondary schools and colleges. The permanent offices of the LWVTX are located in Austin, and its records are deposited in the Southwest Collection, Texas Tech University.

- from The Handbook of Texas Online

History of the League of Women Voters US

In her address to the National American Woman Suffrage Association's (NAWSA) 50th convention in St. Louis, Missouri, President Carrie Chapman Catt proposed the creation of a "league of women voters to finish the fight and aid in the reconstruction of the nation." Women Voters was formed within the NAWSA, composed of the organizations in the states where suffrage had already been attained. The next year, on February 14, 1920 - six months before the 19th amendment to the Constitution was ratified - the League was formally organized in Chicago as the national League of Women Voters. Catt described the purpose of the new organization:

League of Women Voters is not to dissolve any present organization but to unite all existing organizations of women who believe in its principles. It is not to lure women from partisanship but to combine them in an effort for legislation which will protect coming movements, which we cannot even foretell, from suffering the untoward conditions which have hindered for so long the coming of equal suffrage. Are the women of the United States big enough to see their opportunity?

Maud Wood Park became the first national president of the League and thus the first League leader to rise to the challenge. She had steered the women's suffrage amendment through Congress in the last two years before ratification and liked nothing better than legislative work. From the very beginning, however, it was apparent that the legislative goals of the League were not exclusively focused on women's issues and that citizen education aimed at all of the electorate was in order. 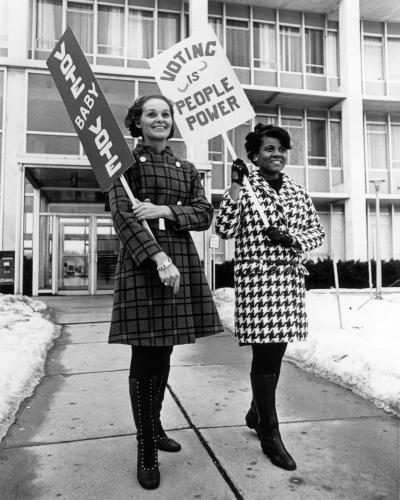 Since its inception, the League has helped millions of women and men become informed participants in government. In fact, the first league convention voted 69 separate items as statements of principle and recommendations for legislation. Among them were protection for women and children, right of working women, food supply and demand, social hygiene, the legal status of women, and American citizenship.The League's first major national legislative success was the passage of the Sheppard-Towner Act providing federal aid for maternal and child care programs. In the 1930's, League members worked successfully for enactment of the Social Security and Food and Drug Acts. Due at least in part to League efforts, legislation passed in 1938 and 1940 removed hundreds of federal jobs from the spoils system and placed them under Civil Service.

See also League History from the League of Women Voters of the US.